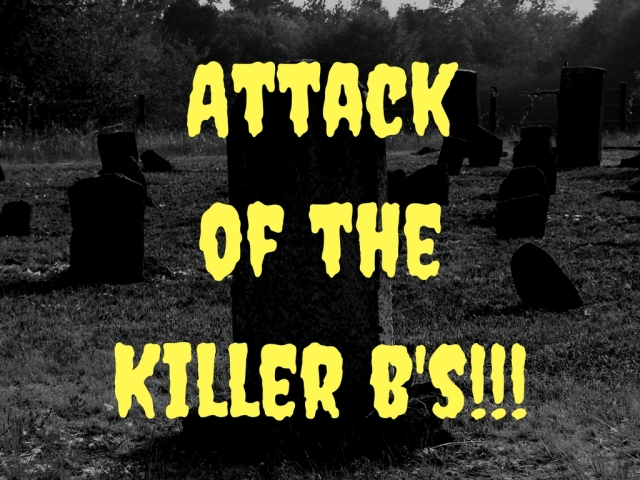 Back in 1992-1993, I was stationed at Ft. Carson, CO.  Assigned to a small Cavalry Squadron, attached to the 4th Infantry Division.

While it was normal for us to party on Friday nights only as soldiers can, my Saturday nights were dedicated to sitting in front of my TV with a pint of New York Super Fudge Chunk and a can of Pringles Cheezum’s (the daily running and PT kept the pounds off).

There was a late-night show on PBS that came out of Pueblo… Attack of the Killer B’s.  It was along the lines of Svenghouli, Elvira, etc..  Three guys (well, two guys and a skeleton hanging by manacles on the wall)… Dr. Reek A. Mortis, Sonny, and Skelvis.

They’d offer what you’d expect – campy humor and lots of banter, but the best thing they did was sing a song that was based on the movie.  It was just so damned ridiculous and fun.

Time counts and keeps counting…. as the years passed, I’d often think of that show, but the name escaped me.  I’d try searching the web for anything about this show and could just never find any information.  I had a few VHS tapes full of the shows, but the quality was so bad (due to aluminum-tipped rabbit ears), that they were hardly watchable after a few years.

A couple of days ago, I was talking to a friend of mine, telling him about this silly show I used to watch.  Lo-and-behold, the next morning, he sent me a couple of links to the songs on youtube!  At which point I immediately created a playlist and added them.

I wonder what ever happened to that Mad Doctor, his singing assistant, and that desiccated corpse of a fairly famous rock star?  Maybe someone out there who reads this will let me know.

So, here are just a few of my favorites from these guys.  Grab yourself a pint of ice cream, a can of your favorite Pringles, and have a little ridiculous fun…

2 thoughts on “Attack of the Killer B’s…”