I was recently contacted by author Carrie Bailey, asking me if she could write a guest post on my blog.  Naturally, my reply was “Absolutely!”.

I know her as an author of post-apocalyptic fiction and an excellent example of witty banter on Twitter.  Her current book, The Ishim Underground is the story of a young man and a wild boy trying to find a place to hide in what was once New Zealand, 500 years after the apocalypse.

2. A ugly often devastated or barely inhabitable place or area

3. Something (as a way of life) that is spiritually and emotionally arid and unsatisfying
That’s what Merriam-Webster has to contribute to the world’s collective understanding of the term that post apocalyptic writers can’t resist.

To me, it appears the dictionary lacks a depth of understanding of wastelands. In my post apocalyptic series, wasteland refers to a specific region of both jungle and desert. The people on the other end of island call it a waste, a hopeless place full of hopeless people, whereas the inhabitants love their home as much any post apocalyptic writer loves typing the word: wasteland. Do it again. Wasteland.

Feels good for something barren, ugly and arid, but why is that?

THE WASTE OF DEFINITIONS

We can easily apply definition three to a Walmart or television or my favorite pub in Wellington, New Zealand, which was strewn with motionless old men and barren beer-soaked wood paneling. These sorts of horrors drain all spiritual and emotional essence from the strongest of us almost instantly. The metaphor certainly can’t reveal how it inspires us.

I suspect the second definition of wasteland is rooted in and popularized by the early imaginings of worldwide nuclear destruction. Ugly is so harsh. Many of the best twentieth century post apocalyptic authors may have been misguided about how a wasteland could be created and how long it would last.

When the camera crews entered the abandoned buildings twenty-five years after the incident at Chernobyl, they found healthy trees and a habitat where deer and other animals thrived undisturbed by human activity. And just as the deepest fears of environmentalists failed to manifest in Pripyat, Ukraine, nuclear power plants and weapons lost their awe-inspiring terror as a catalyst in fiction.

Whatever we imagine causing environmental destruction, desert and wasteland are not interchangeable terms. A desert may be a wasteland, but a wasteland does not have to be a desert. So, it doesn’t explain why a wasteland is so bad, but feels so good to write about.

The first definition, deconstructed logically, may be inferred to suggest that a wasteland is either bad farmland OR land that has not yet been farmed. That would be awesome if contradictory. Applying “OR” as an operator for Boolean logic, it means it must be bad unfarmed land.

Thinking too deeply, it’s clear the dictionary provides no firm vision of what is a waste and what is not. A desert may not be barren while jungles can be torturous to cultivate. And while there is room in metaphor for me to justify calling a jungle a waste, none of it explains why we love to fantasize about wastelands.

Where does this term come from?

A brief search of the internet about the origin of the term does not help as much as it should unless you want to buy Wasteland: A History for a solid 35.00 USD, which does have some intriguing chapters on the human experience of wastelands. I skimmed the google docs sample.

Unfortunately, like most resources, it skips identifying the early uses of the term and separates waste from land then to their respective origins in English. As waste refers to useless and ruined things, this method of understanding wastelands supports the vision of a wasteland as impossible to cultivate. Empty. Barren. A wasteland is empty and barren, because empty and barren things are a waste.

Should we stop searching for answers now that we are hopelessly lost in a semantic wasteland? No, to find who coined the term waste + land, we have to dig. And we find many references to wastelands being cultivated.

However, if we stick to the English usage of wasteland as a combined term of two separate words, we find multiple early uses surrounding Bengal, British imperialism and the Wasteland Rules of 1838. Apparently, the first applications of the term wasteland have to do with cultivating tea. Assam tea. Along the Assam River. And indirectly denying indigenous inhabitants access to the land by creating biased laws.

And as this region is rather tropical, green, prone to monsoons and one of the most densely populated regions of the world, it can be argued that the original wasteland is the opposite of how we envision a wasteland today.

A wasteland was land that invaders believed was being wasted, because no one was using it. And they prized it highly enough to write laws staking their claim to it.

While the first wasteland may have been morally arid rather than physically barren, it appears the readers and writers of post apocalyptic fiction were right.

A wasteland is in its conception a place of opportunity. A wasted land. A blank canvas of soil and air. Miles of possibility. A place to cultivate life, agriculturally or metaphorically.

And that’s the allure of the wasteland whether it’s a desert or a jungle, they are the acres that stimulate the imagination and inspire. 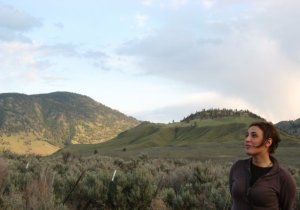 2 thoughts on “So, what exactly is the Wasteland?… Guest blog by Carrie Bailey”